At the WKKF Community Leadership Network all-class gathering in New Mexico, a diverse panel of young people inspired us all with their powerful stories of self-determination and advocacy for their communities. 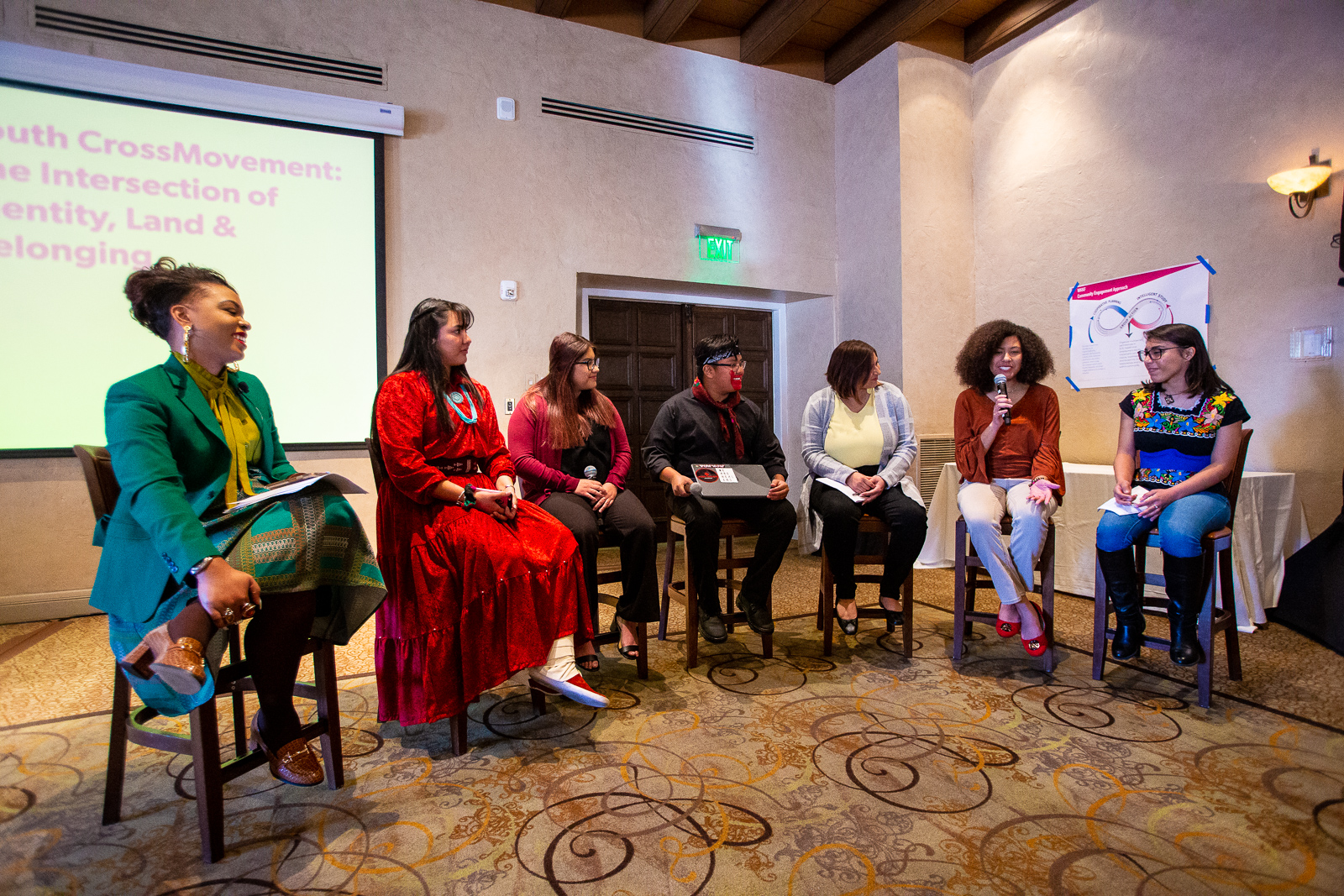 WKKF Community Leadership Network Fellows Ebony Isis Booth (pictured left), an artist and director of diversity, equity and inclusion at an independent school, and Eli Cuna, a community organizer with United We Dream, organized the youth panel to share New Mexico’s multi-culturalism and cross-movement building. Youth were invited to tell stories about their identity and belonging, their connection to culture and place, and their activism. While they each come from different cultures and experiences, their stories illuminated common struggles, as well as opportunities for coming together to create positive change.

“All my life I have lived in the shadows in fear. I was taught to be quiet and make myself invisible. Today, I’m unapologetic and here to stay.” 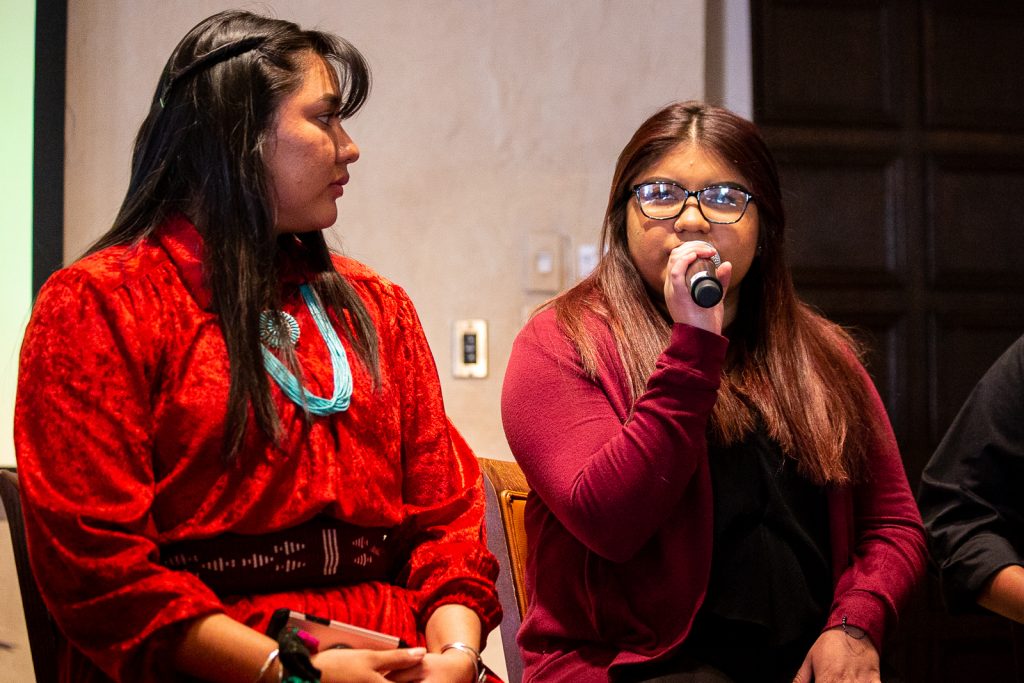 Michelle emigrated from Mexico and was regularly bullied in Albuquerque’s public schools. She tried hard to assimilate but never felt welcomed. She shared how she felt hopeless until she got involved with the New Mexico Dream Team, a statewide network dedicated to empowering multi-generational, undocumented, LGBTQ+ and mixed status families in dismantling systems of oppression. After attending a training, Michelle said, “I felt amazing because, for the first time, I knew I had rights. It’s my second home.”

“We’ve always been taught a whitewash perspective in schools, where people who are not Natives teach us our history – telling us who we are and what we did. It’s really, really hurtful.” 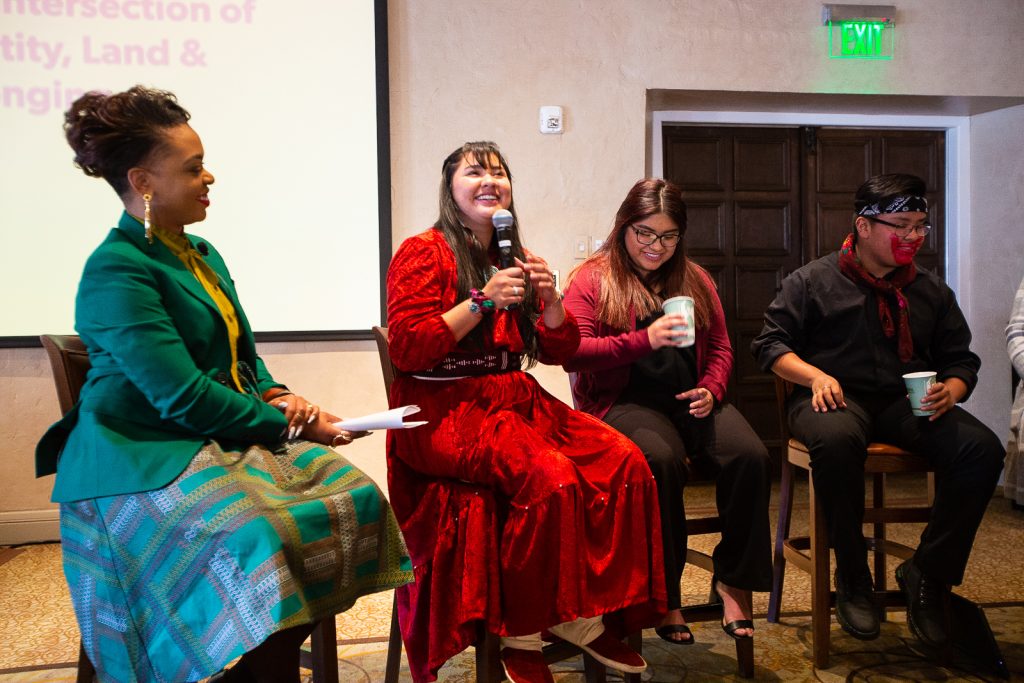 Mckenzie recounted stories of how Albuquerque’s public schools failed her and her classmates. Her teacher regularly belittled students, including taunting Mckenzie and asking if her gory twist of Little Red Riding Hood for Halloween was a “Bloody Indian.” The teacher went so far as to cut off the braids of another Native student. After these experiences, Mckenzie met up with the ACLU and has been taking action “to make it known that cultural appropriation and hostile school environments are not okay.” They are advocating for anti-bias training across the district to prevent this from happening again.

My goal: Create systems of support for students and make sure that no other kid has to go through what I did.

“I know I was treated differently, but didn’t know what to call it. As a teen, I was angry. I was depressed. I didn’t love myself.” 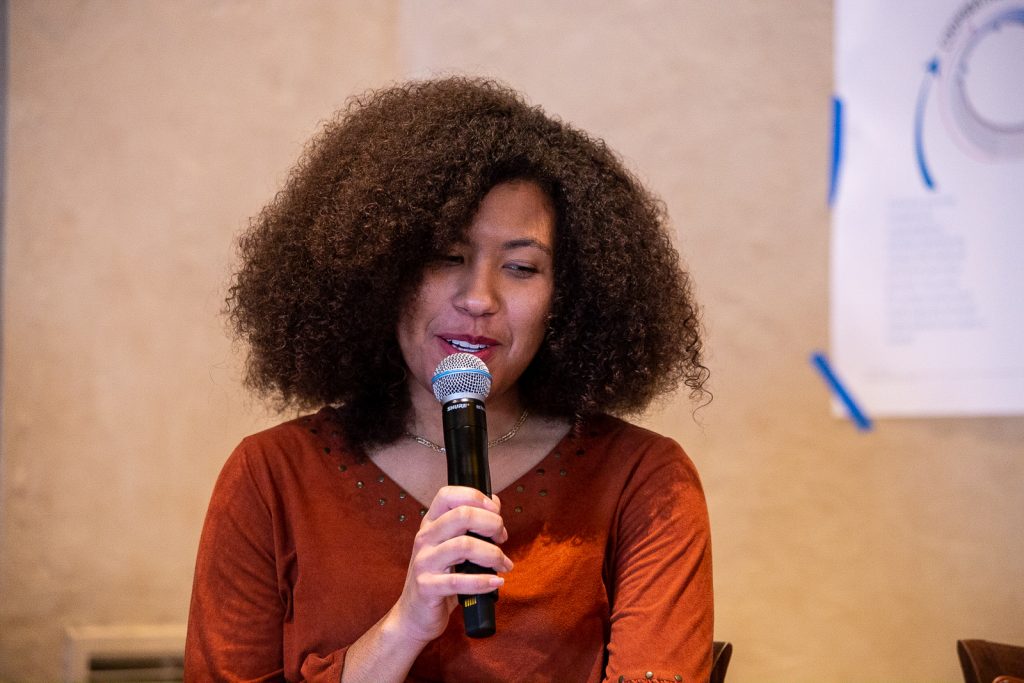 Erica struggled with growing up in a racist environment. She didn’t understand about code switching or how to be comfortable with herself. Fortunately, when Erica was 16 years old, she found an African American Black woman who became her life coach and forever friend, providing Erica with the validation and support to navigate the challenges of growing up Black and female. Erica now works at the University of New Mexico African American Student Services, where she pays it forward by supporting students facing similar struggles to hers.

My dream: My hope for my community is more equal representation. That we are seen, heard and respected.

“Growing up as a Native kid in the city was very difficult. When I would go back to the reservation, I was too city for my cousins. And, in the city, I was bullied for wanting to know my Native culture.” 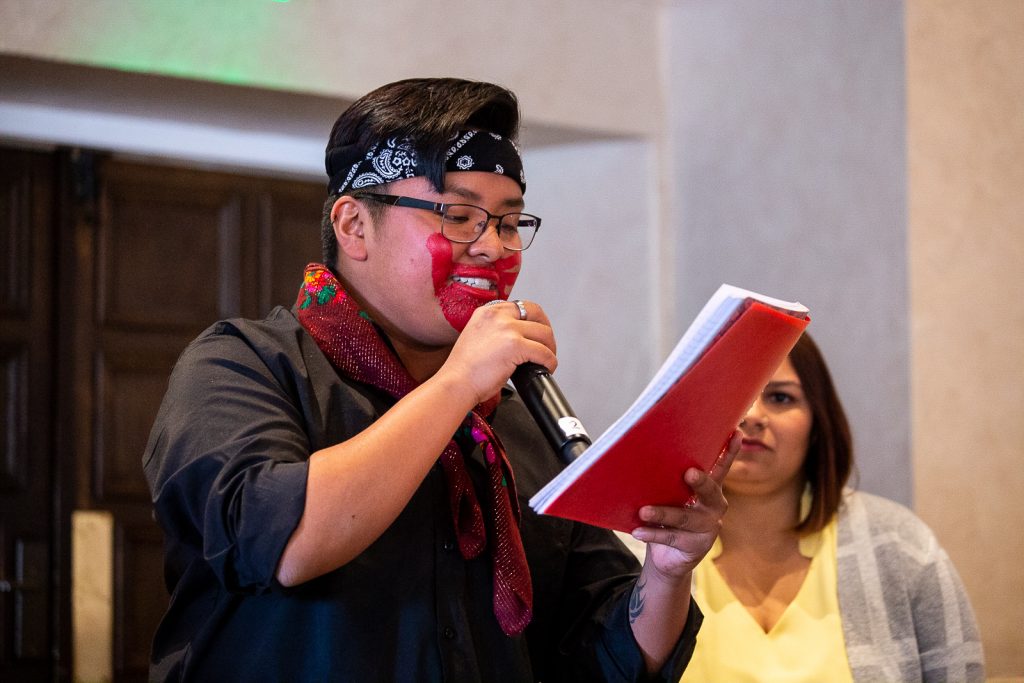 Aaron really struggled with their self-identity as they were constantly bullied for being an urban Native and coming out as gay and trans. Aaron was told by the principal and teachers it was their fault. After not getting the support they needed, Aaron took steps to enroll at NACA, the Native American Community Academy, a charter school in Albuquerque that integrates culture, wellness, language, community and rigorous college-prep into every child’s education. At NACA, Aaron finally felt their identity celebrated. “NACA befriended me, encouraged me, loved me, and really helped me discover who I was.”

My goal: Help other youth like me who have struggled with being an urban Native or closeted and give them the support systems I didn’t have.

“Coming to the U.S. from Pakistan, I was very confused most of my life because through school and every other institution in America I was forced to assimilate. Imagine living in the states as a Muslim woman after 9/11, what that does to you, to your family.” 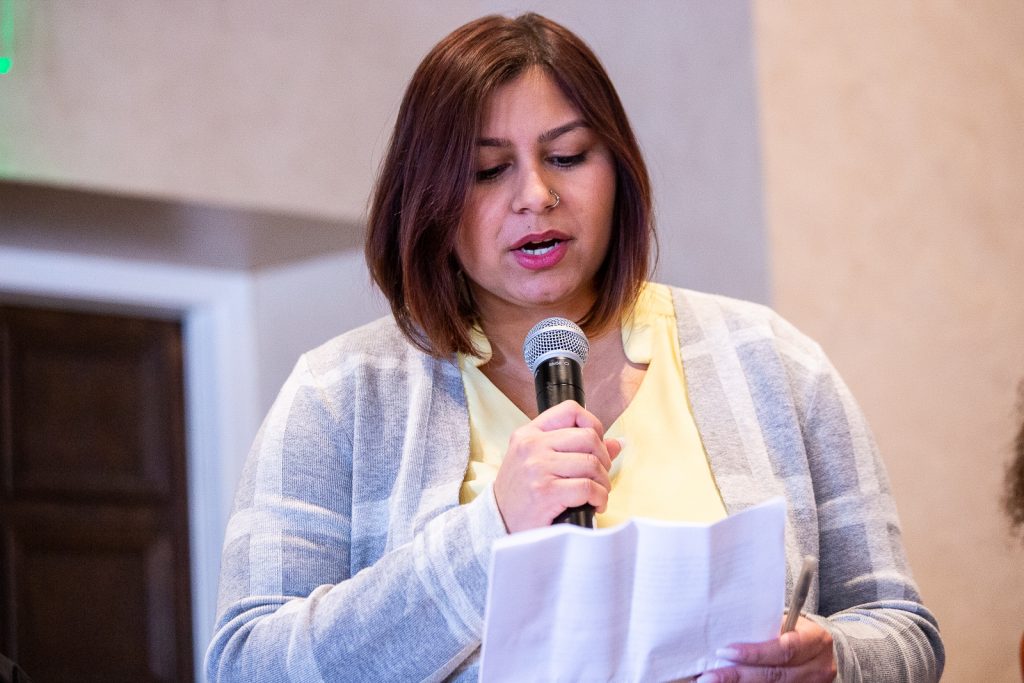 Anushah said growing up she had no way to deal with conflicting identities of being American and Pakistani. Through writing and poetry, Anushah was able to find her voice, telling family stories of celebration in the Eastern ghazal poetic form, passed down by her father. “For me, it’s really important to elevate the voices of those who are in the margins, especially immigrant communities and communities of color.”

My dream: For communities that have been historically marginalized to be seen and heard, and to have representation.

“I got bullied because of my skin color, my language, my accent, and looking Mexican. Since then I decided to be a shelter for undocumented students. I’m unafraid and here to stay.” 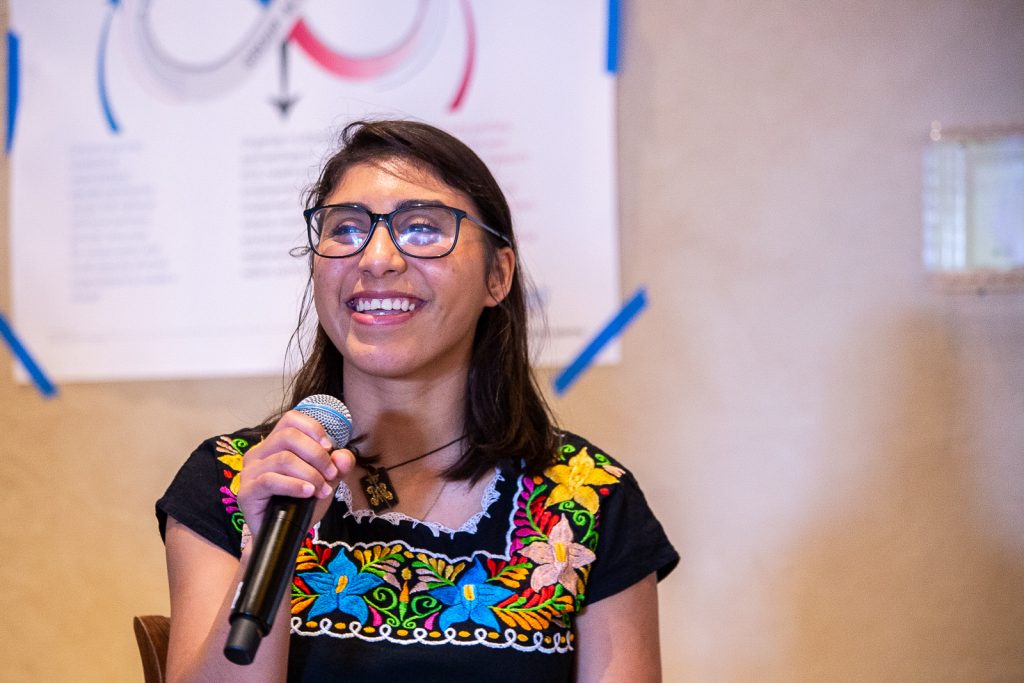 Elvia Michelle emigrated from Mexico to the U.S. when she was 10 years old, running from violence, sexual harassment, poverty and many other issues women and girls face every day. Her first week of middle school she was attacked by a group of students, who kicked and punched her, yelling “Go back to your country, stupid!” She didn’t feel like she belonged until high school, when a teacher gathered a group of students to talk about being undocumented. It was the first time she had heard someone say undocumented aloud. That’s when she decided she wanted to create safe spaces in schools for undocumented youth and she joined the New Mexico Dream Team.

My goal: Support other youth in raising their voices so they can create change in New Mexico.

What we can learn

At the WKKF Community Leadership Network, we’ve learned from youth leaders that when young people’s identities are recognized, celebrated and supported, they grow up to be strong and beautiful people who are incredible contributors to society.

Their stories illuminate how societal pressures to assimilate are making young people sick, and how our institutions are failing all of us. Each youth on the panel was fortunate to find support – whether that was in the form of a mentor, a charter school or a nonprofit organization.

Every youth deserves this kind of support to realize their full potential. Young people’s voices of purpose and passion are essential to propelling us forward to work for the change we need to see and be.