The collective power of people gathering, united around a vision for change, is immeasurable. The impact is tangibly imprinted into the fabric of our society, from the civil rights and suffrage movements to Pride, Black Lives Matter and March For Our Lives.

This transformative power has inspired and guided me in my work to analyze what makes certain movements so effective. I realized early on in this research that no matter how good your idea is, unless it’s connected to community organizing and a strategy developed by the community, you can’t effect lasting change.

Over the years, I’ve tried to distill what makes movements work in 10 essential elements (after all, a short list is easier to remember than long academic volumes!).

What defines a social movement?

How does a movement create transformational change?

How does a social movement gain power?

While presented as 10 simple steps, movement building is not easy and takes time. As Dr. Martin Luther King said, “The arc of the moral universe is long, but it bends toward justice.” Now, we all have to work together to bend it. 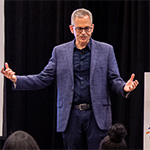 Dr. Manuel Pastor is a distinguished professor of Sociology and American Studies & Ethnicity at the University of Southern California. He is director of the USC Program for Environmental and Regional Equity and the USC Center for the Study of Immigrant Integration. A former Kellogg Fellow, he says, “the Kellogg Fellowship changed my life because that’s when I began doing work with and for community-based organizations.”

Denise Rhiner
Uncategorized
« What Is Effective Leadership?
Read More
Are You Building an Ecosystem? »